Thank you for your interest in our oragnization. Complete the form below to send us an email, or simply give us a call. We're looking forward to speaking with you.

Your message has been sent.

Please make sure fields are complete. 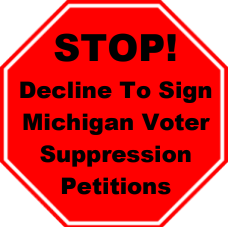 DO NOT sign away your voting rights to fair and accessible elections!

An anti-voter rights petition has hit the streets all across Michigan and soon there will be people in your community asking you to sign a petition, claiming it will “secure voting rights,” when only the opposite is true. What they will not tell you is that this petition drive is actually an attempt to gather enough signatures so that its backers can get voter suppression legislation on the books in Michigan – an anti-voter process which will allow them to bypass the Governor’s veto. This cynical ploy, if successful, will make voting harder for all Michiganders, especially Black and Brown voters. That’s why the Michigan NAACP is asking you to “Decline to Sign” this petition led by the so-called Secure MI Vote initiative. Do not be fooled!

Please share this information with your family, friends, co-workers, church and community:

For additional information, please contact your local NAACP office or email us at: info@minaacp.org.

“Freedom is not a state, it is an act. Freedom is the continuous action we all must take, and each generation must do its part to create an even more fair, more just society.” – The Hon. John Lewis

In addition to regular hours, the City Clerk’s Election Unit will be open: